The cost of Scouting is made up of a number of factors. Historically in Troop 166 most costs are paid “a la carte” on a per use basis. Our fund raising is used to subsidize the cost of summer camp and monthly outings. The Troop committee annually sets the amount Scouts pay for each and the amount the Troop subsidizes. The national organization charges a separate, modest amount of dues and provides a good magazine- Boy’s Life. These costs are rolled into the troop dues as explained below.

On average (not including clothing and equipment which can vary all over the map), it costs slightly more than $725 per year to keep a boy in scouting. Costs and participation vary, and some costs are subsidized by the Troop, so almost no one actually spends $725 in a year. A look at approximate costs for 2016 shows that the $725 breaks down roughly as follows:

Each February, there is an annual fund drive for the Chief Seattle Council called Friends of Scouting. While participation in this annual fund drive is not required, it is strongly encouraged at a level that averages about $156 per boy. If our Troop reaches its participation and financial goals, it saves the Troop a considerable amount in the purchase of supplies and awards from the official source of supply. Proceeds from this council drive fund many staff and facilities costs in this region that are not funded by United Way or any other agency.

The Troop itself runs several fund raising events of its own such as compost sales, and car wash ticket sales to replenish our treasury. Participation by both boys and parents in these is required because they are the primary source of income for the Troop. 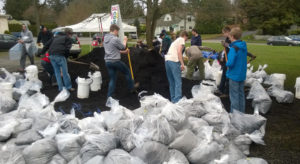 The fee for troop dues are about $95.00 per scout and $82.00 for the second scout from the same family. Troop dues includes re-charter fees and subscription to Boy’s Life magazine. The fee to attend Camp Parsons in 2017 is $75.00 per scout and is non-refundable due to decision made by Chief Seattle Council. $75.00 includes $25.00 for transportation and $50.00 to hold a space to go to Camp Parsons.

The $95 is based on a January 1 to December 31 calendar year. If a Scout enters in mid year, the costs are prorated. Our Assistant Scoutmaster will work out the details with new members so that if, for example, a Cub Scout has already paid their council dues and Boy’s Life subscription, the “expired” portion of that payment will be deducted or rebated back to the family (i.e., you won’t have to pay twice).